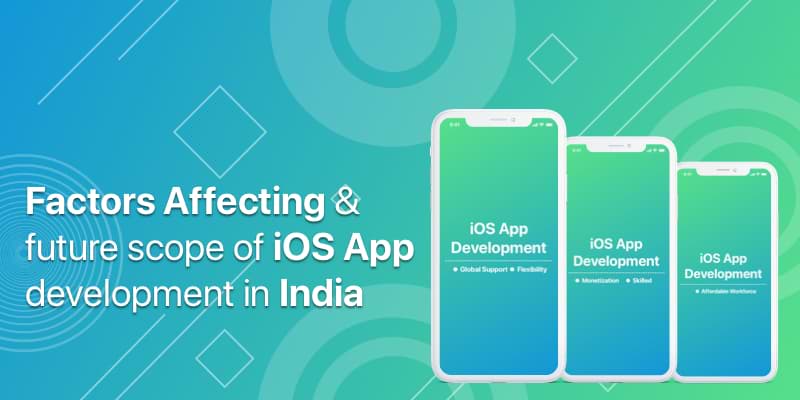 With the rising popularity of Apple devices across the globe, there has been a noticeable rise in iOS app development companies. iOS smart devices are witnessing increasingly high demand worldwide as they have robust and secure features. It is the second most widely used platform after Android. Yet, the future of iOS app development seems as bright as Android, especially in India. Let’s explore in detail.

Emulators: iOS emulators are faster, provide better support and of higher quality, as compared to other operating systems. This allows the developers to easily and efficiently develop the app. Android emulators are comparatively slower and not good at support.

Lesser fragmentation and bugs: The apps developed in iOS have lesser bugs comparatively as the number of versions and the types of devices are limited and the code in Swift is shorter. The apps in other operating systems need to deal with a large number of screen sizes, brands, and platforms.

Better tools and developer support: Apple provides great support and tools to its developers than any other operating system. iOS app developers find it quite effective and reliable. For instance, XCode is better than Android Development Studio.

Coding language of Swift: Coding is the most crucial part of the entire app development process. Swift is being widely used by the developers for iOS app development and it is known for delivering excellent results with minimal coding efforts. It also acts as a great communication tool between the coder and the computer.

Related Article:  Call Center Software - Which Are Must Have Features in VoIP Billing Solution?

Lesser development time: iOS has faster emulators which require less time for development as compared to other platforms. Also, the coding language- Swift requires shorter codes which saves time and efforts of the iOS app developer.

Why is the future of iOS App Development bright in India?

India is one of the fastest-growing markets for Apple devices in the world. Their high demand has created ample of job opportunities for iOS app developers in India. The key reasons why the future of iOS App Development is bright in India are mentioned below:

Global support
The network of Apple Inc’s developers and the developer center of Apple provide invaluable support and resources to the developers from any corner of the world. They help in coding for all Apple platforms like iOS, macOS, tvOS, watchOS, etc.

Skilled and affordable workforce
iOS app developers in India have vast knowledge and a strong technical background in iOS. They are highly experienced in creating error-free apps and implementing user-friendly functions. Also, as compared to other markets, Indian iOS app developers provide an advantage over the costs. They are budget-friendly while providing higher quality in work.

Monetization
Most of the apple users prefer paid mobile apps. This is an inspiration to the iOS app developers to create interesting apps for different business models. These apps can be monetized on the I-tune store to earn more money.

iOS apps have a rich and innovative look. They are easy to build and more profitable. Their engaging features and high-level of security have helped them gained prominence in the market. Apple uses the most modern technologies in their apps and constantly improves its UI/UX design.

Due to all such significant reasons, the development of iOS apps is worth consideration. Also, looking at the availability of highly skilled and experienced developers in India, the future of iOS app development seems brighter.

Call Center Software – Which Are Must Have Features in VoIP Billing Solution?