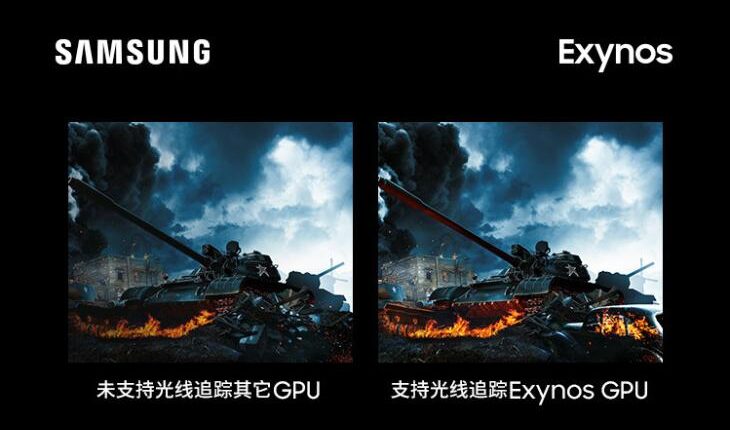 Excluding Google’s Tensor chip, one chipset most of us are looking forward to is the one from Samsung in collaboration with AMD. We have been hearing about AMD’s partnership with Samsung to bring RDNA GPU microarchitecture to smartphones for years at this point. Earlier this year at Computex 2021, AMD even confirmed that the next Samsung Exynos chipset will feature AMD’s RDNA2 graphics.

While we wait to witness the chipset in action on Samsung’s next flagships, Samsung has now taken to Weibo to confirm ray tracing support on the upcoming Exynos 2200 chip with AMD GPU.

The now-deleted post on Weibo confirms ray tracing on Exynos 2200 chipset featuring AMD GPU. You can, however, take a look at a copy of the post shared by tipster Ice Universe on Twitter below: 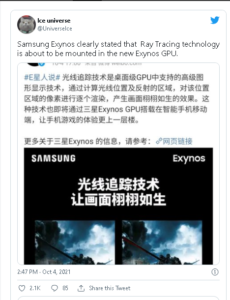 “Ray tracing technology is an advanced graphics display technology supported in desktop GPUs. By calculating the position of light and the area of reflection, the pixels in the position area are rendered one by one to produce a lifelike effect. This technology is also about to be carried on the mobile terminal of smartphones through Samsung Exynos GPU, taking the experience of mobile games to a higher level,” reads the translated (Chinese to English) version of the post.

Ice Universe also revealed what’s supposedly the official clock frequency data of the Exynos 2200. Going by the tweet, Exynos 2200 will feature a single Cortex-X2 core clocked at 2.9GHz, three cores clocked at 2.8GHz, and four cores at 2.2GHz. The AMD GPU present here will allegedly be of 1250MHz frequency. In addition, other reports hint that Exynos chipset with AMD GPU beats Apple’s A14 Bionic in graphics test.

Related Article:  Meaning of eco ATM and its Importance